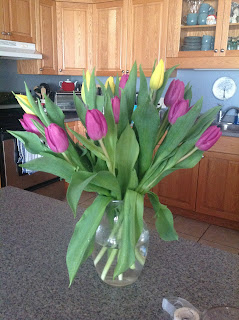 Mother’s Day was so much better this year.

Four years ago, I sobbed in the car because someone paid for my tea.  I pulled up to the drive-thru window with a smile on my face and then the server told me the driver had paid and wished me a great Mother’s Day.  It felt like someone had ripped the bark right off me.  I did not qualify. I had failed to qualify.  In an alternate timeline, I would have been 7.5 months pregnant and delighted; that tea would have made me feel seen, recognized.  Instead, I had been mistaken for something I wasn’t and reminded of the previous November’s loss. Now I had suddenly lost Mother’s Day, too.

Three years ago, I thought I was ready.  My second pregnancy had ended six months earlier and we’d come closer than anyone would like to losing me, too.  Pregnancy number two had an ultrasound photo as proof. I remembered hearing the heartbeats. It was happening. And then. Bang. Happened.

There had been other joys and sorrows by Mother’s Day, but I was still putting lots of energy into coping. We were away for a wedding and even though I was with lots of people who knew, nobody said anything. The firehose of love for mothers left me in the dark...and suddenly I could see how crowded it was in the dark. And we were invisible to almost everyone else. And I was angry. Quietly angry but still angry.

Two years ago, I anticipated anger but it was more muted. It would have should have could have would have been my first real Mother’s Day. But it wasn’t. And by then I knew there wouldn’t ever be one for me. I bought tulips and avoided Tim Horton’s and posted something vague on Instagram. Blessed are the mothers who mourn. Blessed are those who rejoice.  I expected nothing. A few friends reached out and that poked holes in my bark but didn’t rip it off.

Last year, I was in a different gear. I don’t remember much except that I was a bit more open, a little more transparent but I still had my armour on. There was distance from my grief then and I was probably in a distracting snit about something else instead.

And then this year was surprisingly great. I was mostly happy.  There was a feeling of loss but I was able to see it and hold it for a minute instead of being held by it all day.

I couldn’t figure it out at first. When the day came creeping toward me I reminded myself that it was just a day. I thought about getting flowers but didn’t. We couldn’t visit our moms so there was no push or pull about where to go when.  We spent Saturday afternoon with our little niece (our bubble buddy) while her moms had some time to themselves and then Sunday just happened. We talked to our mothers and I thought briefly about what might have been...but that was it.

And I couldn’t figure it out.

I hadn’t been blindsided by anyone’s good intentions. No one had overwhelmed me with awkward sympathy. There had been some nice things and some acknowledgment but I didn’t feel raw about it.

Was I over it?

And then I realized that it was because of the pandemic. The lockdown (or partial lockdown for us at that point) meant lots of people couldn’t see their mothers. Lots of people were feeling loss.  There was lots of gratitude and acknowledgment of what people had and something about what they were missing...and while it was different for them than for me, I felt less alone and, strangely, better prepared for the day.

Blessed are those who mourn.

Popular posts from this blog 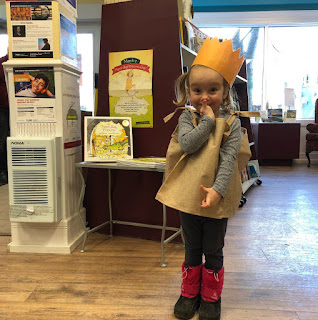 Photo credit: Westminster Books
Kerry Clare recommended Amy Rhoda Brown’s newsletter and I signed up after reading an article about how why talented people don’t use their strengths.  Since then, I’ve been thinking about how we often undervalue things that we inherently do well.  I see it a lot. I overlook it a lot.  Personally, I often push myself, measure myself against things that are difficult for me and focus on shortfalls, frankly, rather than acknowledging what I am naturally drawn to or good at.
I was thinking a lot about this while I was dissecting cloth bags from the dollar store and making the costume my niece is wearing above.The Paper Bag Princess by Robert Munsch and illustrated by Michael Marchenko celebrated 40 years of publication yesterday and my local bookstore celebrated with the book and cake.
My niece was excited to go to a party with me and asked if she was going to wear a costume. Sure! I thought about it a little while I went about my business on Friday. I consid…
Read more 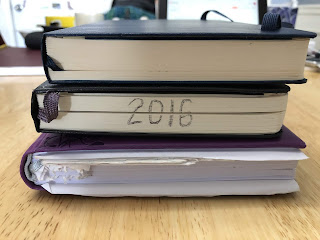 I’ve been keeping a “book” since 2011. It started out as a few lines a day in a weekly planner; small and doable, initially prompted by Gretchen Rubin’s book The Happiness Project but inspired by my Dad and my great aunt who’ve kept books for years. My Dad makes quick notes about the weather and who he speaks to and tasks he accomplishes. If something noteworthy happens, he adds that too. Aunt Dot started keeping a 5 Year Diary in 1970 or so and added a few lines every day for decades; notable births and deaths and happenings are sure to be there, as well as notable letters or calls.
My books are about my day, what I did and how I felt. If something notable happened in the world or around me and it got my attention, I’ll add that too. The first year, there was room for only a few lines but I moved to a daily planner the next year and gave myself room to say more. I don’t go back often unless there’s something I’m looking for it when I do, even flipping through the book brings back mem…
Read more